A familiar stranger on Facebook recently said to me, “At first I thought you were obsessed with Ronnie James Dio, now I see that you were friends”. Indeed, we were…

It was the summer of 1983 and I was still amidst the clutches of disco (yes, DISCO) when I'd heard a song that was clearly not only heavy metal but, undeniably attention grabbing. For the next few months commercial radio taunted me by playing it, but never saying who performed it. In September '83, a guitarist friend presented to me a cassette tape by a band called...Dio. After listening to the first 7 tracks, it was the 8th that caught my ear. "There's that song...THAT song!”. That song was "Rainbow In The Dark", and my fanship for Dio was off to a bang.


Flash forward to August 2, 1990 when I'd finally meet the man, the legend & my childhood hero. After gushing myself, wetting myself and drooling like a basketcase, Ronnie asked me, "Are you Big Jim?". Wha da??? Well during his birthday & Christmas each year, I'd send a card or a small gift to the Dio Fan Club thinking if he gets it kewl and if he didn’t, no harm & no fowl. It seems that he not only got em, but recalled from who & where. He sees a 500 lb fool gushing, wetting & drooling, pieced it together and viola...A great friendship was born.

Flash forward once again to May 16th, 2010. In the 20 years since the inception of our friendship, I have so many fond memories of Ronnie...Besides the music he's given us, I also have memories of meeting his family, opening up for Dio in 1997 at Tuxedo Junction, seeing “Star Trek Generations” with him, Thanksgiving dinner on the tour bus, being featured in TWO Dio DVDs & being credited as the photographer of the front cover photo of “Dio’s Inferno~Last In Live”...Among many others. Ronnie also introduced me to his band mates & crew most of whom I’d befriend, and other Dio fans/friends that I now consider to be great friends. Lastly, I have memories of how he treated EVERYONE. Ronnie gave so much of himself not only professionally, but personally. Ask anyone who's ever met Ronnie~At the 120+ times I've been backstage at his shows, he's given nothing but his time, love, heart & soul to everyone he met. It was utterly amazing. I knew almost from the start that Ronnie loved me…A wall which was difficult for many to climb due to the low self esteem I felt in my earlier years. Ronnie’s love was easy to accept…It was easy because he loved everyone and loved equally. Although I'd known of the disease since November 2009, I wasn't ready to let him go when I heard the news on May 16th. But I didn't want to see him suffer anymore either. So let him go, I shall. I’m convinced that if Ronnie lived to be 100 years old, many would want him to live to see 110…Me being one of them. But knowing he's not suffering anymore is well worth the price of losing him. 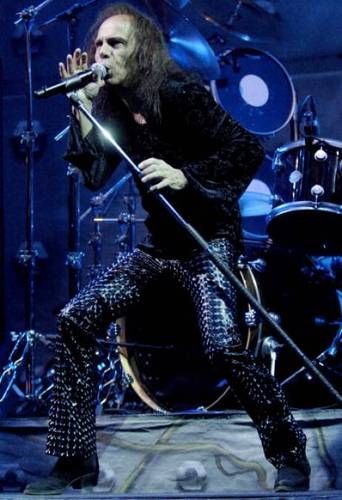 I'm convinced this is one of THE best pics of RJD I've ever seen! 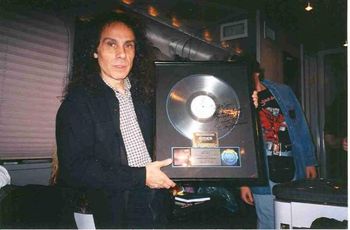 Ronnie was astounded by this gold "Last In Line" that I owned! He signed the front, "To Big Jim-How Do You Do It? Love Ya" on the Dio tour bus in 97. 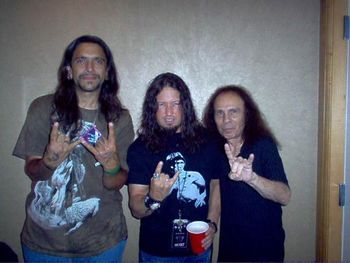 Eddie Jackson from Queensryche, RJD & myself. 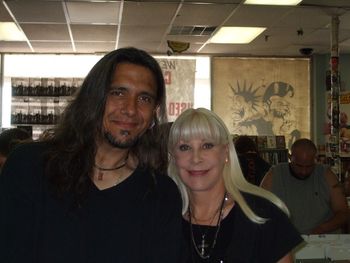 The ever beautiful Wendy Dio in 2008. 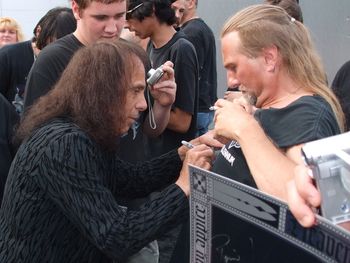 Ronnie NEVER declined an autograph...He amazed me with his neverending kindness! 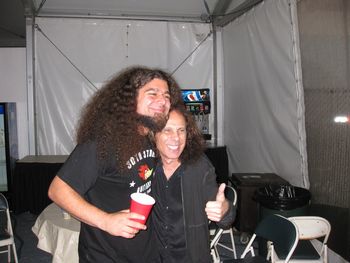 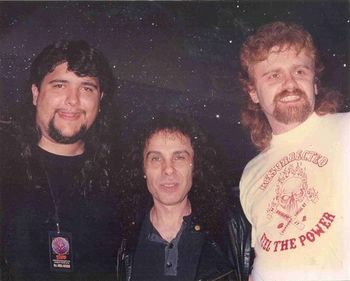 Kurt Carlson, RJD & myself at The Sting in New Britian, Connecticut...1994. 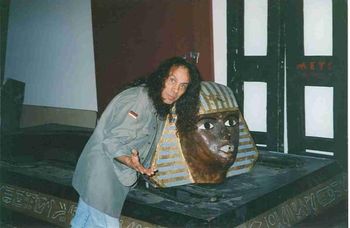 Ronnie was cordial enough to allow me to be present during the writing seesions of "Angry Machines" in 1995. He took a break to post with this prop from Dio's Last In Line Tour. 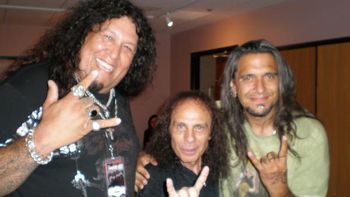 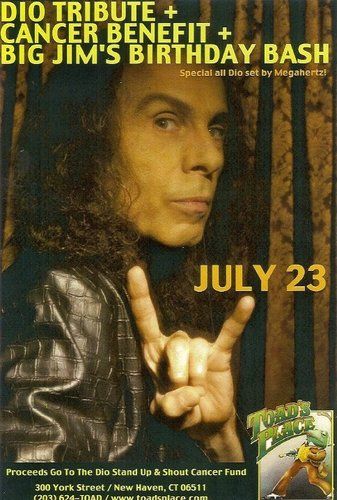 Over 700 people came to this wonderful show hosted by Threat, Solar Angels, Vengeance, Category 5, Megahertz, Karmic Justice & Gargamel. Also...Check out the all star line up of "Stars" at www.blabbermouth.net. We're doing it again in 2011...Keep you posted. 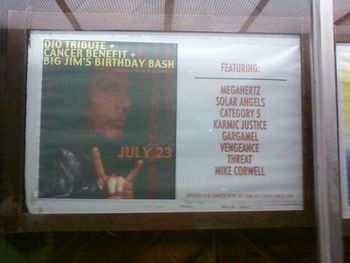 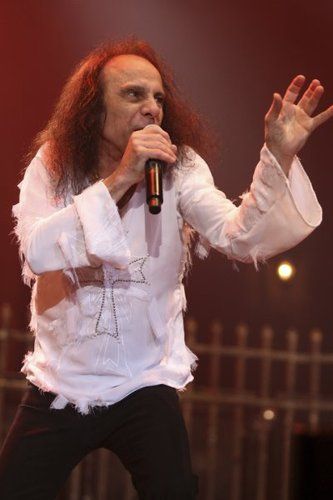 This photo was used as the backdrop for the Dio Tribute/Cancer Benefit at Toad's. 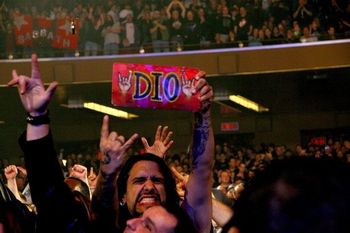 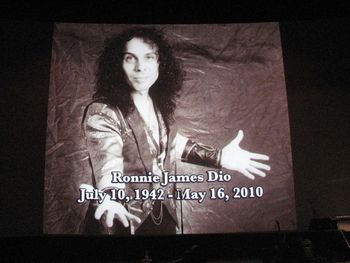 Attending Ronnie's memorial was filled with so many emotions. 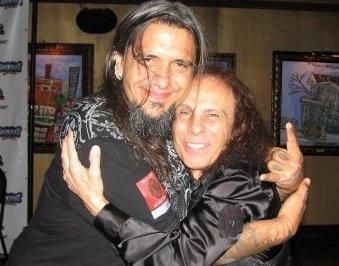 This would be the last pic I'd ever take at the last gig Ronnie would ever play...House Of Blues in Atlantic City on 8/29/09.